On June 21, 2015, artist Galya Pillin Tarmu passed away in the Jersey City home of her son Eldad and daughter-in-law Alina. Her life was characterized by the values of truth, passion, and courage. On August 13, 2015, she would have turned 89.
Galya’s personal life was filled with devoted friends drawn to her authenticity, wisdom and clear sense of values. She struggled throughout her life with afflictions that would have rendered a less courageous person unproductive. Until her late eighties, Galya conducted her life as an artist with great intensity, putting in days of work that would make a person half her age envious. She is a hero to anyone that aspires to be creative and fully genuine.
Sadly, Galya’s last years were made painfully complicated by a recurring lung cancer and exhausting legal battles caused by unscrupulous attacks to her financial security.
Through her voracious readings, Galya was acutely aware of everything going on in the world. During her final years she kept a social media presence and a blog (now under galyatarmu.com), which was a reflection of her artistic insights and vision.

This site uses Akismet to reduce spam. Learn how your comment data is processed.

AUBREY AND JONAH IN THEIR CHINESE SUITS

PICNIC WITH GRANDMA AND GRANDPA 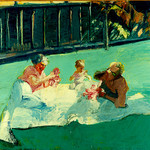